COAL TOWNSHIP (NORTHUMBERLAND COUNTY), PA - On Thursday July 4, 2013 at 06:20 hours the Coal Township Fire Department (Maine, Union, Forrest Hills, East End, Brady, and Fairview Fire Companies,) Coal Township Rescue Squad and AREA EMS were dispatched to 1262 Chemnug St. in Coal Township for a house fire. The Coal Township and Shamokin Police arrived in a minutes and found smoke and flames coming from the first floor front and rear windows of the home. The fire continued to spread quickly and began to move to the second floor and attic.

The Coal Township Fire Chief arrived on scene and then requests the second alarm due to a working fire in a large single home. The second alarm brought Shamokin Ladder 32, Shamokin Rescue 62 (RIT), Shamokin Liberty Engine 21 and the remaining of the Coal Township Fire Department. Maine Engine 110 was on scene first and established a water supply from a hydrant on Chemnug Street. The crew deployed a number of hose lines and made an offensive attack to stop the fire. The Brady Fire Company Engine 151 established a second water supply and deployed additional hose lines to the rear of the home.

Three fire fighters were slightly injured when the rear porch and roof collapsed into the back yard. The Incident Command then assigned the additional arriving Coal Township and Shamokin Fire units to back up the first in companies in fighting the house fire. Additional arriving fire fighters assisted the first in engine crews in stretching a hose lines to the rear of the residence. The deck guns from Engine 111 and Engine 151 were placed into service operating in a defensive mode. The multiple number of exterior hose line helped to knocked down the fire in the rear.

Shamokin Ladder 32 staged a block away and sent its crew to the front of the home. The additional Shamokin crews backed up the first attack crews by operating the exterior hose lines and finished extinguishing the fire. The Shamokin Rescue 62 responded to the scene and its crews provided RIT operations.

The smoke and fire conditions in the home improved and the crews had the fire under control in less than 45 minutes and without further incident. The fire investigator believes the fire started in the first floor kitchen and traveled to the second floor. The fire chief reported that there were no major injuries of fire fighters and the home received major damage. AREA and Sunbury EMS stood by and provided REHAB to the fire fighters.
Read More 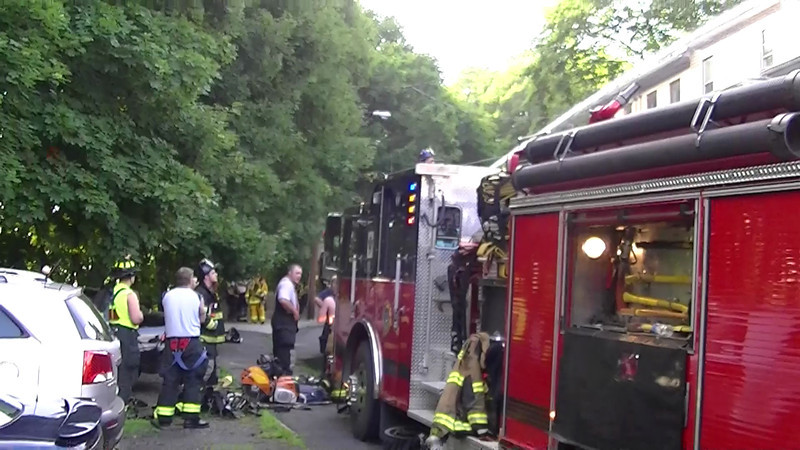